Horace, the Roman poet known for his satire, was merely being gently ironic when he cautioned young poets against using “sesquipedalia verba”-“words a foot and a half long”-in his book Ars poetica, a collection of maxims about writing. But in the 17th century, English literary critics decided the word sesquipedalian could be very useful for lambasting writers using unnecessarily long words.

Latin sesquipedalis, literally, a foot and a half long

A sesquiquadrate is an 135-degree angle.

A sesquicentennial is a period of 150 years.

A sesquinona in music, is an interval having the ratio or 9:10—that is, a lesser major second. 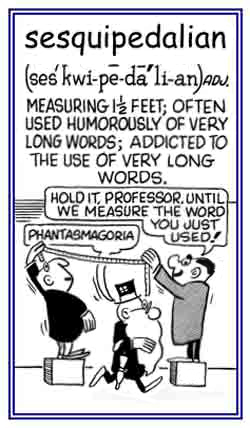